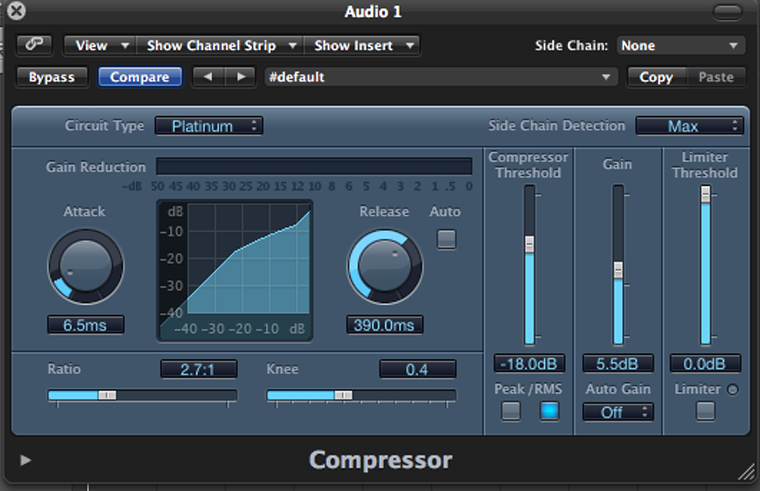 What is a compressor

Compressor is an audio processor, which reduces the differences between the weakest and the strongest audio signal. Basically, it will help you to equalize your recording in a way that all parts will sounds approximately equally loud. Which means the loudest places are muted according to your choice of parameters, while the weak points are left untouched. You can use it on track for compressing individual instruments or voices, such as guitar, drums, vocals and also for the overall mix.

To understand the compressor it is first necessary to describe the basic types of settings.

It is the limit of the signal at which the compressor is switched on. For example, it may be -10dB. The louder signal will be lowered by adjusting the ratio. The signal can be measured by its volume – Peak level. The human ear however perceives a signal in much more complex way. We call it its total acoustic power – RMS level. Some compressors can therefore be switched on this measurement. A special way of measuring is the so-called low- level, where the bass frequencies are considered for the final signal level. The X axis indicates the input signal level and the Y-axis output signal level. The curve shows how the sound will be muted. In our case, the compressor is set to a ratio of 1:2 and Threshold to -20 dB.

It is the time at which the compressor stops compressing the sound after that the signal falls below the threshold. This is a very important setting as it affects how the recording will breathe.

Before we describe the specific examples of using, there is necessary to explain what we shall avoid.

Change the color of sound

Distortion arises for example when we set a bad attack and release settings. If you set the attack time too short, the sound will sound unnatural. If the release is too long, it can change the sound. This could be seen for example on kick, where these values play an important role.

Using of the compressor

If you don’t want to spend time manually adjusting the compressor, use predefined presets, which almost every compressor has. At least as a base for further editing, presets are good and quick.

These settings are only indicative and I recommend it be used more as a basic guide. The final adjustment will be governed by sound quality, color of sound and overall dynamics. Threshold set by ear.